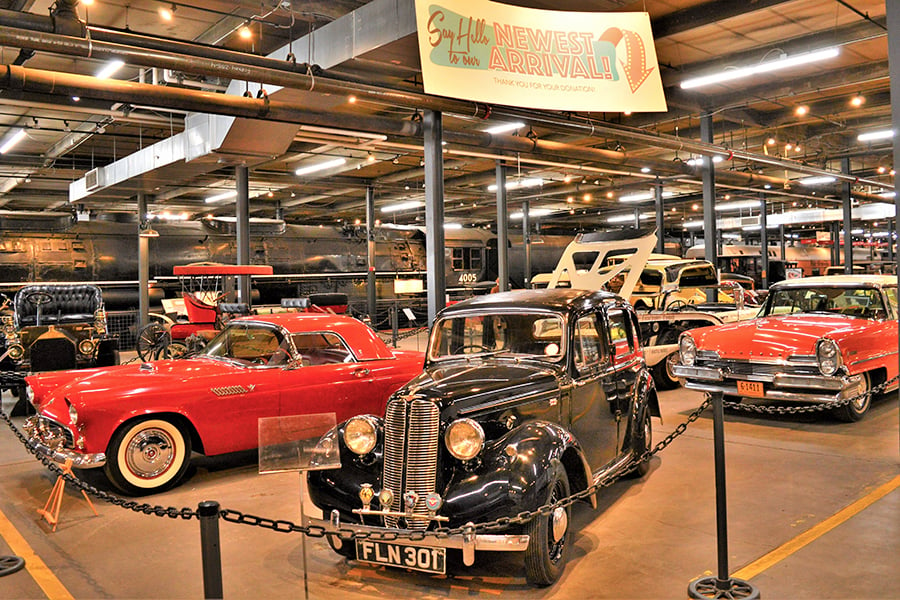 Editor’s Note: The article was written based on the author’s experiences prior to the pandemic. Some of museums described in this article may still be closed or may be limited on the number of visitors it allows. Reservations may also be required. If you visit, please follow local, state, and federal safety protocols and social distancing practices to keep yourself and others protected.

Pop quiz! What was the first car you ever rode in? Wow, that was fast! I’m not surprised. Cars park themselves in our memories alongside the people and times we associate them with.

I remember my grandfather cranking the window of his Rambler Ambassador to vent his cigarette smoke. I can still see our “Blue Bomb” Chevy station wagon, overstuffed with six people and what seemed like a year’s worth of provisions, for a week of camping in Yellowstone. I blush when I think about that company vehicle I once drove, ranked eighth on a list of the world’s ugliest cars. That’s you, AMC Pacer.

Okay, not every car is a classic, but there are places across Colorado that treat the lowliest jalopy like royalty. Whether you’re looking for eye-popping elegance, pure power, or oddball quirkiness, you can find it. Rescued from junkyards, donated by benefactors, and restored by devotees, they occupy places of honor in big cities and small towns.

Let’s buckle up and hit the road for a tour of five Colorado auto museums where every car is king. I call shotgun!

Somehow, it’s fitting to have an admitted Studebaker fan show you around a museum that proudly displays more than its share of car makes that have gone to that great junkyard in the sky.

“There used to be hundreds of car makers in the United States,” says Christof Kheim, executive director of the Forney Museum of Transportation. “I really like the oddball stuff that people have never heard of.” 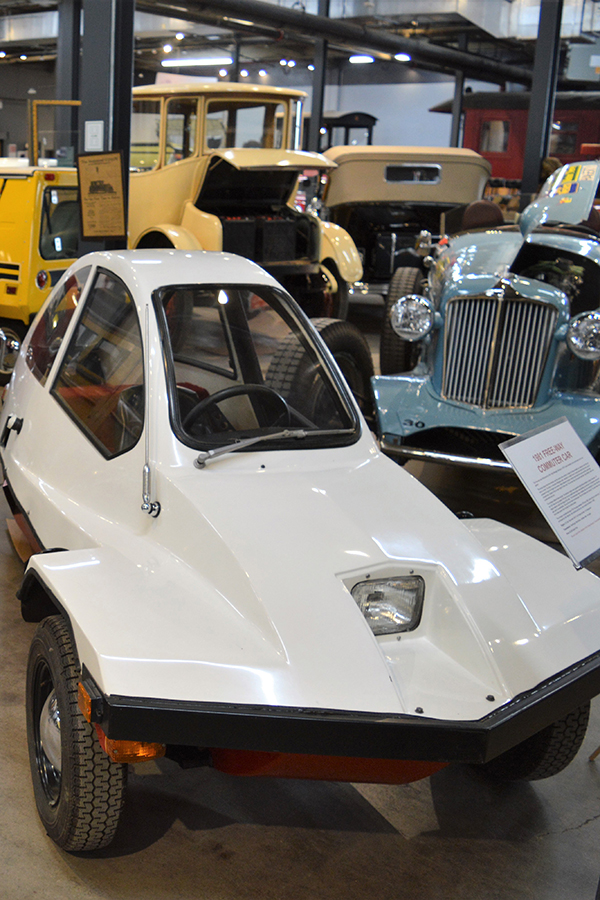 The Free-Way car—three wheels, one seat, and a lawn mower engine. © Pat Woodard

Look up “oddball” in the dictionary and you might expect to see an accompanying picture of one car I saw on the display floor—three wheels, one seat, and a lawn mower engine. These were called commuter cars when they were built a few years after the energy crisis of the late 1970s. I stifled a chuckle at the name on the side: Free-Way. As in, they’d get run off the freeway.

This museum covers all aspects of transportation, so cars are just part of its huge gallery, but they’re an important component, and the collection is more than kitschy curiosities. Christof stops in front of a 1923 Kissel Gold Bug “speedster” that once belonged to legendary aviator Amelia Earhart. Steps away is a gleaming 1957 Dodge Lancer with just 37,000 original miles, located by a museum volunteer.

“I like working with local owners and collectors whose cars just sit in garages,” Kheim tells me. “Here, someone finally gets to see them.”

About a third of the large display floor is devoted to new exhibits that rotate in about every three months. My visit coincided with “Movie Cars & More” (now thru July 31), featuring vehicles that appeared in everything from The Dukes of Hazzard to Ghostbusters to Scooby-Doo.

Looking around the Forney Museum of Transportation, I have to agree with the sentiment on the license plate of the Scooby-Doo Mystery Machine. “Zoinks,” indeed! 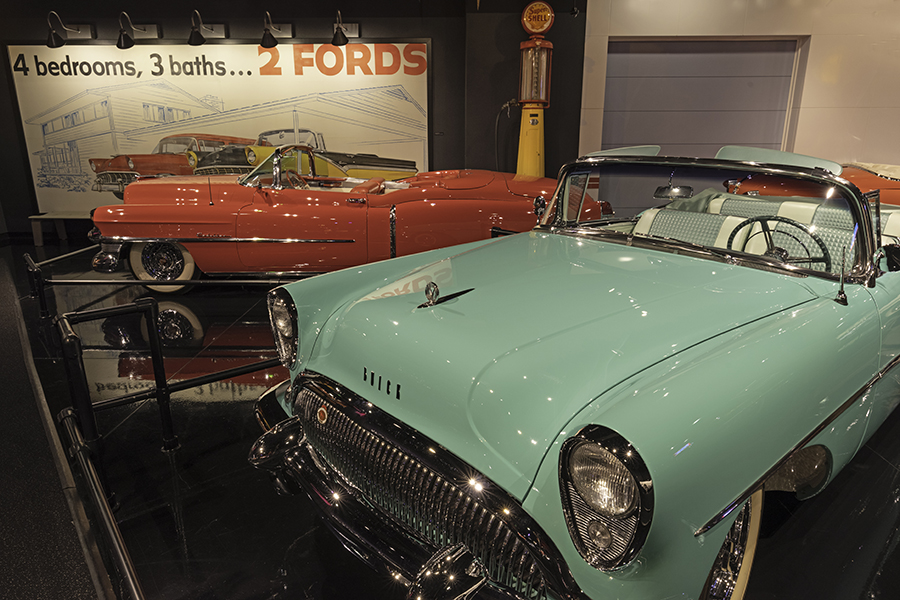 Despite the sign, this 1954 Buick Skylark Convertible (front) and this 1953 Cadillac Eldorado Convertible (rear) are just a few of the cars on display at the Gateway Auto Museum. © Kerrick James

Can anything indoors rival the spectacular outdoors that surround the Gateway Auto Museum? Maybe not, but here you can enjoy the best of both. About an hour’s drive south of Grand Junction, you enter Unaweep Canyon, the setting for a AAA Four Diamond-designated destination—the Gateway Canyons Resort and Spa. Here, not only are guests pampered, classic cars get the same treatment.

It’s tough to pick a star attraction at the Gateway Auto Museum because there’s such a wealth of riches. Five galleries evoke different eras of automotive evolution. The Mass Mobility gallery displays cars that first got America behind the wheel. You feel like a golden-age movie star headed to a red-carpet premiere in the Hollywood High Style gallery. The American Muscle gallery gleams with sleek lines pulsating power. Vehicles look fast enough to earn a speeding ticket even while parked in the Custom Crazy/Racing gallery. And the final gallery is devoted to a single car, which might seem excessive, until you realize the F-88 “Concept Car,” built by Oldsmobile in 1954, is literally one of a kind. It was acquired for an auction price of more than $3 million.

Throughout the museum, context comes from thoughtfully placed memorabilia, like the mock-up diner and the billboard trumpeting a new standard for a prosperous home: Four bedrooms, three bathrooms, two Fords! The best thing? You don’t need to be a guest of Gateway Canyons Resort to visit the museum. 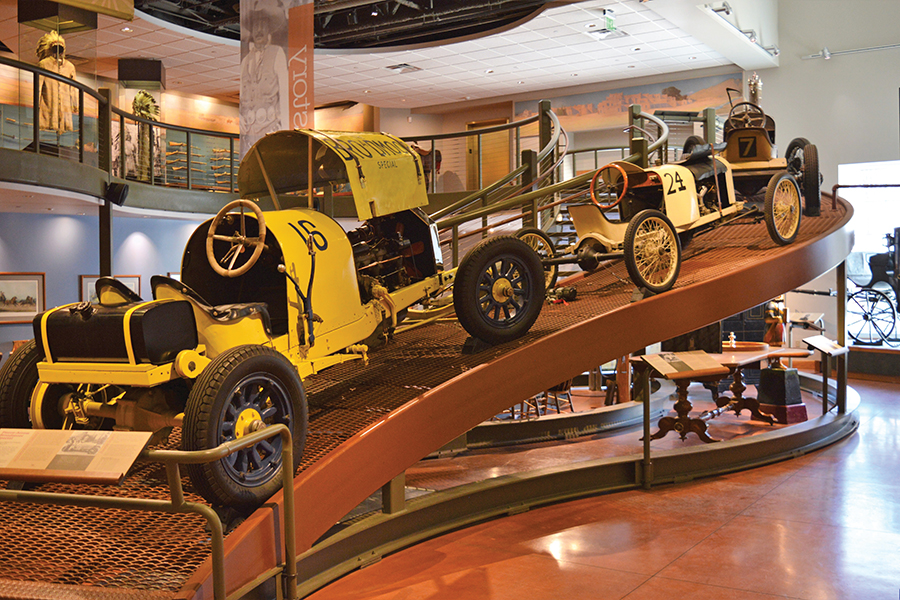 In 1916, Colorado Springs tycoon and philanthropist Spencer Penrose had a crazy idea: Race automobiles to the top of Pikes Peak. Penrose thought the race would publicize the summit road he was instrumental in constructing and draw visitors to his new hotel, The Broadmoor. We should all have such mad schemes. Today The Broadmoor is a regular recipient of the AAA Five Diamond award for excellence, and the Pikes Peak International Hill Climb is the country’s second-oldest auto race.

Across the street from The Broadmoor at the Penrose Heritage Museum, I climb a flight of stairs next to cars that seem to be climbing the mountain. A winding steel ramp leading to the Penrose Trophy holds vintage racers, including the 1918 Broadmoor Special. This car drove the race route in 2016 for the Hill Climb’s 100th anniversary.

“The driver said he could have gone faster,” Assistant Curator Amanda Knoll tells me. “But look at the wheels. Those are wooden spokes, and there are a few cracks.”

In a separate wing, the Pikes Peak Hill Climb Experience features vehicles and memorabilia spanning the race’s long history. There are cars that conquered the mountain, as well as the crumpled remains of one that catapulted off the road in 2012. Fortunately, both occupants survived.

One of the museum’s best features is its price. A stipulation of the El Pomar Foundation, established by Spencer and Julie Penrose, decrees that admission is free. The museum showcases a variety of western cultural artifacts in addition to its automotive collection. Still, a custom-made 1928 Cadillac may be the museum’s most poignant exhibit. The car was Spencer’s gift to Julie. Together, they made countless trips in elegant comfort. Spencer died in 1939. A heartbroken Julie never took the car out again.

Hours: Tue.–Sat.: 9 a.m. to 5 p.m., Sun.: 1 to 5 p.m.
Admission: Free. The museum is designed for self-guided tours; however, guided tours are available by reservation only and should be made at least two weeks in advance. 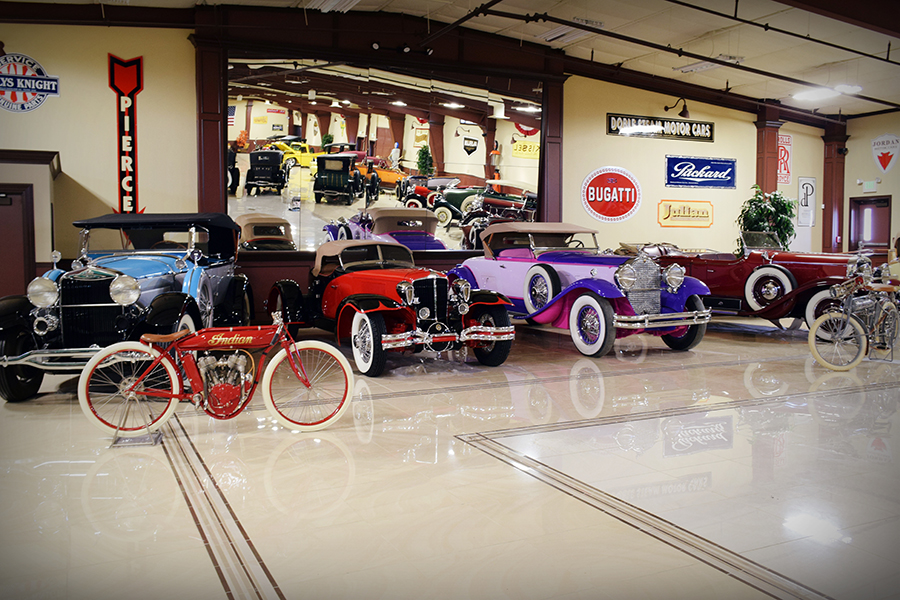 The diverse collection of vehicles at the Rangely Automotive Museum includes a 1930 Lincoln, a 1907 Indian board track racer motorcycle, a 1929 Cord Boat Tail, and a 1930 Packard 745 Roadster. © Kelsey Peters Photography

Welcome to the only automotive museum built with empty pop bottles. When museum owner Bud Striegel was a kid, selling pop bottles to a bar provided cash to buy “junk” cars he wanted to fix up. That passion eventually led to one of the most impressive collections of classic cars and motorcycles you’ll find anywhere, well worth a stop if you’re in northwest Colorado.

Looking as if they just rolled off the assembly line, models from the 1920s evoke pre-Depression luxury. A 1928 Cadillac Sport Phaeton looks like something that would have chauffeured Al Capone around Chicago. Its $4,000 sticker price equates to $60,000 today. To many visitors, the names on the grille are unfamiliar: Pierce-Arrow, Mercer, Crocker, Detroit Electric—yes, electric! A century before we started seeing Tesla electric cars on the road, a Detroit Electric vehicle went 242 miles on a single battery charge, at an average speed of 12 miles per hour.

The collection here is diverse and still growing, so vehicles are rotated on and off the display floor, and you never know exactly what you’ll find. Maybe you’ll be charmed by the elegance of the 1935 Brewster, with its heart-shaped grille; or puzzled by the 1960 Chevrolet El Camino, with the pickup-style cargo bed and the gnarly rear fins. This small-town discovery will surprise you, and even make you grateful for soda in glass bottles. 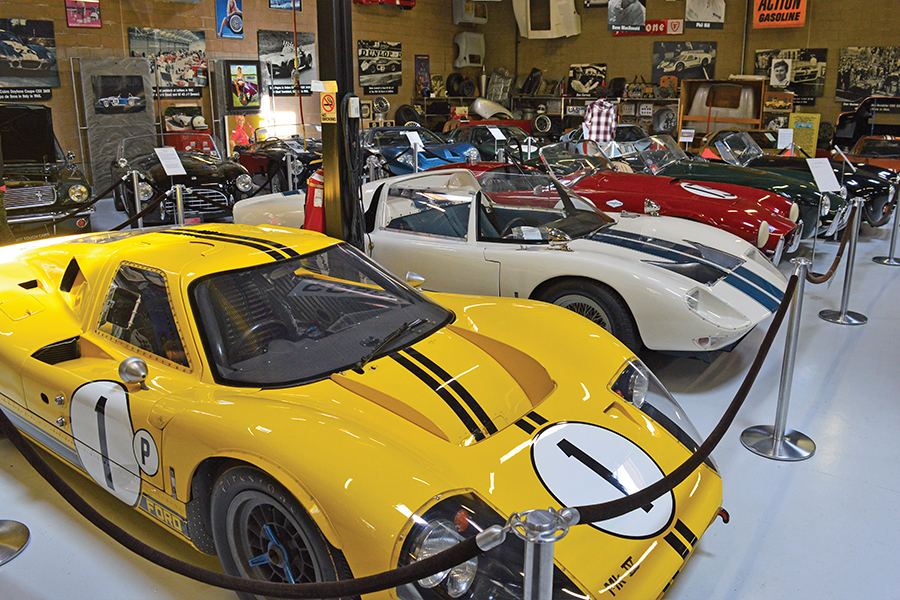 Some of the vehicles in the Shelby American Collection were designed and built for the sole purpose of breaking the domination of Ferrari in international racing. © Pat Woodard

Far from Hollywood, there’s a place where the real story of an American racing legend leaves Tinseltown in the dust. The Shelby American Collection has a lot of great memorabilia connected to the automotive design genius portrayed by Matt Damon in the film Ford v. Ferrari. Here, you get the story behind Carroll Shelby’s formidable imprint on auto racing during his time with Henry Ford and on his own. Take a lap around the display floor to see racing suits worn by famous drivers, period photographs, even a bronze statue of the man himself.

Still, for most visitors, the cars are the stars—and what a collection! Dozens of rare and restored racers evoke the days when Carroll Shelby’s designs, drive, and determination shook Europe’s domination of auto racing.

I eavesdropped as volunteer Mark Puzo showed visitors the 1964 FIA Cobra Roadster CSX2345, the museum’s only un-restored team car. It looks just as it did after the last race of its storied career—battle-scarred with dents and scratches earned from its years of competition, but ready for action. Puzo has been a volunteer at the Shelby American Collection since it opened in 1996. It’s clear he relishes taking the time to show visitors this fascinating chapter in the history of auto racing.

“These were my heroes,” Puzo says as he surveys the photos of legendary drivers suspended above the sleek machines they drove. “I’m proud to preserve and continue their legacy.”

Take a look back through automotive and Colorado history with a video tour of the Forney Museum of Transportation, including an up-close look at one of only eight Big Boy locomotives in the U.S.—all on the Denver7 streaming app. Just search “Denver7” on your Roku, Apple TV, Amazon Fire TV or Android TV to download the app, and then scroll to the “Discover Colorado” section. 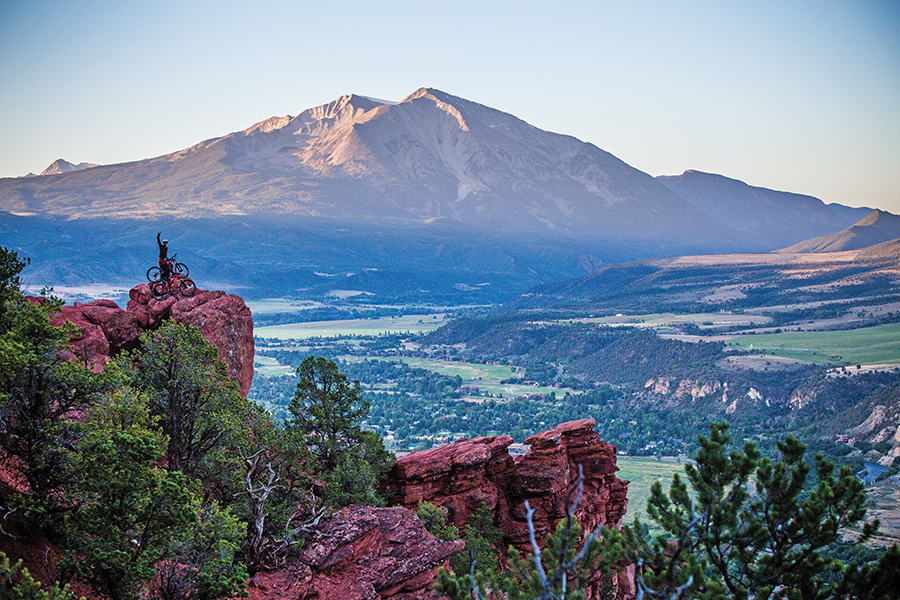 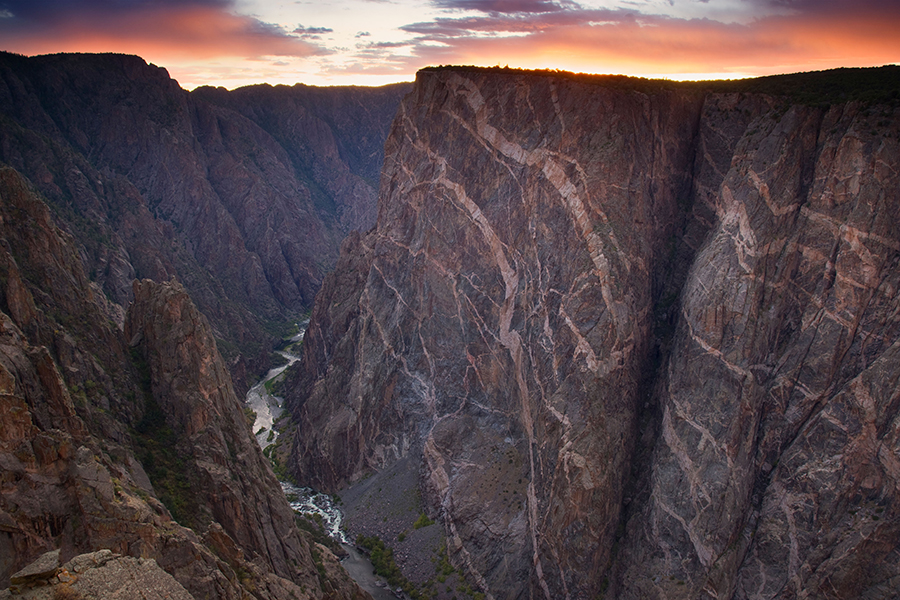 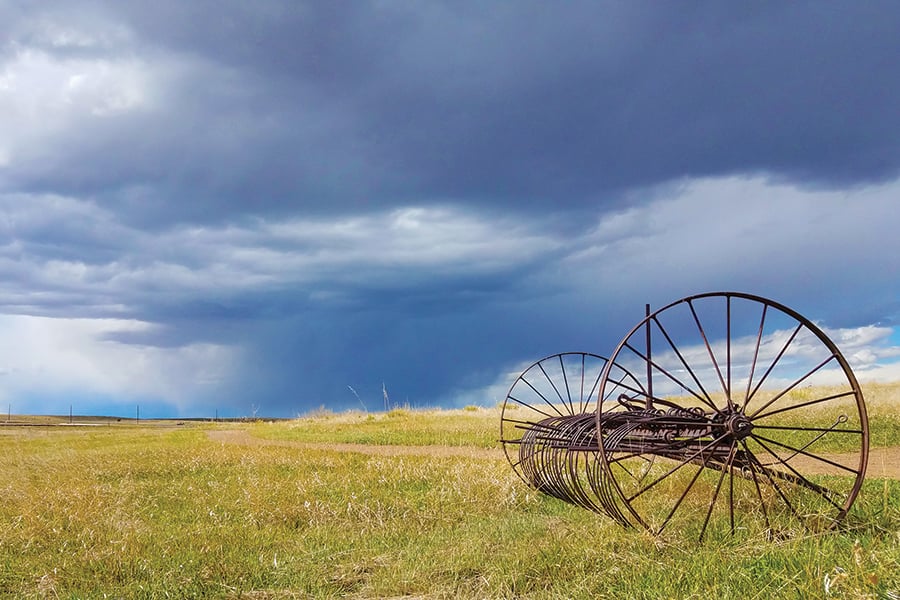 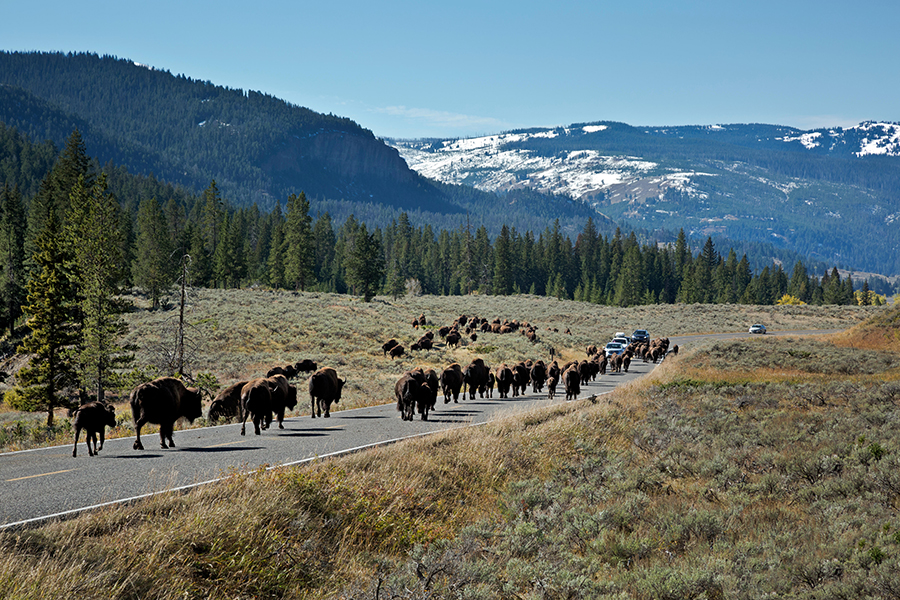 The Travel Insider: My travel bloopers

Joe shares a couple of funny, unexpected, and even weird things that have happened to him in all his years of traveling.