Rediscover the path to the West 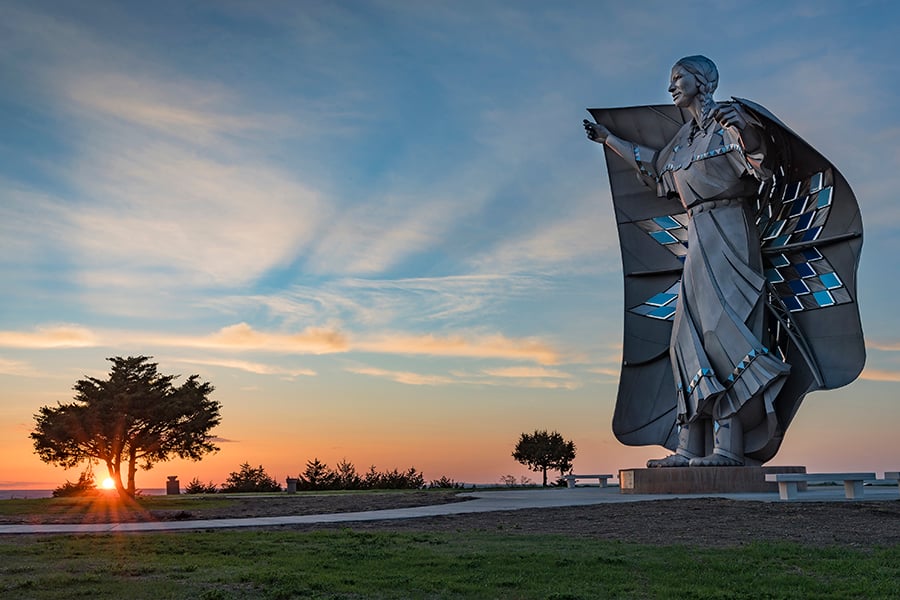 Dignity of Earth & Sky, a 50-foot-tall steel statue of a Native American woman has welcomed visitors since 2016. Courtesy of South Dakota Department of Tourism

Famed explorers Meriwether Lewis and William Clark once ventured inland from the Missouri River in search of legendary little devils that tribal stories said inhabited a conical hilltop that rises above the prairie near Vermillion, S.D.

Standing on what’s now called Spirit Mound Historic Prairie and part of the Lewis & Clark National Trail, the biggest marvel is that it doesn’t take much imagination to picture this landscape as the expedition saw it in 1804. Herds of bison no longer roam freely, but prairie flowers dot the landscape with purple. Blue sky arches like an umbrella, and a bench beckons me to sit, breathe deeply, and listen for songbirds among the grasses that ripple like an ocean of green.

Serene solitude and a welcome sense of timelessness can be found throughout South Dakota. As the fifth least-populated state in the U.S.—behind Alaska, Wyoming, North Dakota, and Montana—it averages 12 people per square mile.

Most live near Sioux Falls in the east or Rapid City in the west, both thriving urban hubs drawing an increasing number of young people back to their home state to open restaurants, breweries, and farms where quality of life is like the prairie: deeply rooted.

That leaves plenty of small towns, dirt roads winding past sunflower fields and pastures, and scenic bluffs for travelers hungry for an open road and a respite from traffic jams, strip malls, and the mental clutter of modern life. The Missouri River beckons with its rich Lakota history, natural beauty, and tales of Lewis and Clark. Here’s where to soak it all in with a three-day adventure.

Ryan Heine takes visitors on a tour of his 6th Meridian Hops Farm where they grow and harvest fragrant hops to create a variety of craft beer. Courtesy of South Dakota Department of Tourism

After enjoying views at Spirit Mound, follow the Missouri River west as Lewis and Clark did on an epic three-year quest to explore the continent and find a route to the Pacific.

The Missouri stretches 2,300 miles north and west from St. Louis, Mo., to Three Forks, Mont., making it longer than the Mississippi River. Together, the legendary rivers form the fourth-largest river system in the world.

Near Yankton, the road across Gavins Point Dam leads to the U.S. Army Corps of Engineers Visitor Center on the Nebraska side of the river. The expansive view includes the engineering effort to tame the Mighty Mo and create Lewis and Clark Lake, a popular reservoir with more than 400 campsites on or near its shores.

Exhibits include Lewis’s handwritten notes for an Aug. 30, 1804, speech he delivered on chalky Calumet Bluff to the Yankton Sioux. The 11-page manuscript was preserved and passed through tribal members until it surfaced in 2003.

On the lake’s South Dakota side, boats and sailboats bob in the marina. Outdoor guides take visitors to the best spots and offer advice for catching coveted walleye (the state’s official fish), white bass, and even ancient-looking paddlefish, which can grow up to 7 feet long and weigh 150 pounds.

Ben’s Brewing in downtown Yankton quenches a thirst for a cold local beer after fishing. On weekends, 6th Meridian Hops Farm taps at least a half a dozen rotating brews—from a Crow Peak black currant sour Göse to Lost Cabin’s Lord Grizzly Scotch Ale. All are made from hops grown and harvested from the 8,000 vines that climb 18-foot-high ropes on about 10 acres. Ryan and Michelle Heine, and their extended family, dry and pelletize the fragrant hops on this multi-generational farm and offer tours of the operation.

“We have our own unique terroir,” Ryan says, and part of the challenge is learning which varieties will thrive here—a mission that can take up to four years to determine.

Dozens of colored corn cobs are used to create the themed mural façade of the Corn Palace in Mitchell, S.D. © dreamstime.com/Landon Woodward

Grab a sweet bite at Yankton’s Delight Donut before heading 80 miles north to Mitchell, home to the world’s only Corn Palace. Designed to be an agricultural showstopper in 1892, it’s still astonishing tourists more than a century later.

“Wow!” exclaims a man who click-clicks photos of the turreted folk-art façade covered in themed murals made using more than a dozen colors of corn cobs. Murals depict sunflowers, a summer storm, and farm fields, but they change every year, keeping the designs fresh. The corny theme flows indoors, too, to what’s a modern event center for sports, concerts, and expos.

Visitors can join a free guided tour or wander on their own, grabbing chewy popcorn balls or chocolate-drizzled caramel corn for munching, while heading farther west.

Highways spool past a patchwork of corn, soybean, sunflower, and sorghum fields on the 70-mile trek to Chamberlain. As the landscape nears the dimpled, impressive bluffs of the Missouri River, a 50-foot-tall steel statue of a Native American woman named Dignity of Earth & Sky has welcomed visitors since 2016.

“She is so amazing to look at,” said Mike Normile, executive director of Chamberlain-Oacoma Tourism. His own family embraces and blends both Native American and European heritage, using July and August to celebrate Lakota culture through the many area pow wows.

Dignity holds a prairie star quilt in her outstretched arms, its 128 individual diamonds rippling in the wind. Her location puts her at the geographical midpoint between South Dakota’s “East River” (fertile, flat farmlands) and “West River” (rolling bluffs and ranchlands) and represents the Lakota culture that’s deeply rooted throughout South Dakota. Visitors can travel the 350-mile Native American National Scenic Byway that roughly follows the Missouri River north through several reservations in both Dakotas and learn more about the tribes at Chamberlain’s Atka Lakota Museum.

On the campus of the St. Joseph Indian School, the museum’s poignant exhibits highlight a deep respect for elders and tight-knit families; artistry and storytelling through beading, leatherwork, and art; cultural changes with fur trading; the Black Hills gold rush; westward expansion; and wars that led to reservations. South Dakota includes nine reservations and more than 71,000 Native Americans.

Early 1900s boarding schools tried to separate tribal members from their culture, but it was through honoring that culture that keeps St. Joseph’s going as a modern-day residential school for youth needing support.

Frank Bunker, a grandson of early homesteaders, tells tales of his early years on a local ranch and the pride he saw in Lakota children while he was a houseparent at St. Joseph’s Indian School. Many of them share a feeling of being deeply rooted into the rolling bluffs that bracket the Missouri River.

“I love the river,” said Bunker, now retired. He points out places where families can stop along the shore to fish, build a campfire or even set up a tent to spend the night. “If you live around here, it’s just a peaceful, quiet way of life.”

After breakfast at the Arrowwood Cedar Shore Resort, we took the 30-mile drive toward Lower Brule, winding past cornfields and sunflowers which are in full bloom by late July. Sheldon Fletcher, our guide we met at the Lower Brule Reservation’s Golden Buffalo Casino, took a small group of us to a trail leading to the Big Bend of the Narrows, the largest naturally occurring bend in a U.S. river. We started with a peek into a replicated earth lodge, a cozy communal dwelling for long-ago tribes whose skills, local knowledge and hospitality were essential to early explorers.

“Keep an eye out for rattlesnakes,” he advised as we hiked the rugged landscape dotted with spiky yucca plants, prickly pear cactus, and fragrant sage brush. At the top, an expansive overlook sweeps across the bend, referenced in Lewis and Clark’s journals more than 200 years ago. The landscape seems almost unchanged except for distant fields with forage crops and corn.

We reluctantly leave the view—and a bench perfect for a picnic. The bison beckon.

South Dakota leads the nation in bison production, and closer to town, the Lower Brule herd of about 200 snorts and grumbles, munches grass, and keeps a close eye on its young in a 3,000-acre pasture. Prairie dogs periscope in and out of mounds that dot the fields, tipping their furry heads back and chirping warnings.

The Native American Scenic Byway overlaps with Highway 1806 (part of the Lewis & Clark Trail) as it heads toward Pierre, climbing above river bluffs and curving by pastures where calico horses cluster together and cream-colored cattle amble above a grassy ridge.

Seeing only one or two other vehicles and a line of motorcycles on the 48-mile drive, it feels like a secret byway and one of the country’s most laid-back drives to a state capital. Pierre is one of the smallest capital cities in the country. Fittingly, the black-domed capitol blends elegant murals and details, such as Italian marble tiles, with a balance of modesty and practicality. To save design costs, local leaders built an exact replica of Montana’s capitol building in 1910.

A few minutes north of the city, the Missouri River shores are once again quiet and empty. A single boat with a float turns in circles to the delight of shrieking, happy kids. It looks tiny on the 370,000-acre Lake Oahe reservoir with a shoreline that stretches for almost 2,300 miles.

Horses nicker near the visitor center above the Oahe Dam as Jeff Gillaspie of Tinker Kennels saddles them up for a ride. He takes up to four people out at a time, keeping the experience small and personal, with time to talk about history and the landscape that beautifully unfurls along the Missouri River.

“[Riding on a horse] lets you see things from an entirely different perspective,” Gillaspie said. “It lets you focus on where you are right at that moment. It’s almost spiritual.”

As the horses gently clop up the bluff, we can easily conjure images of earth lodges and the laughter of Lakota families, the wonder of explorers, and grit of ranchers who all have traversed this river and lived on this land beneath a wide-open sky.

“You can see for miles and miles,” Gillaspie said. “It’s just awesome.”

Lisa Meyers McClintick is a freelance travel writer, photographer, and author of The Dakotas Off the Beaten Path: A Guide to Unique Places (Globe Pequot Press, 2015).

Alaska is a top destination on many bucket lists, and one thing that makes it so special is there is a variety of ways to experience it. 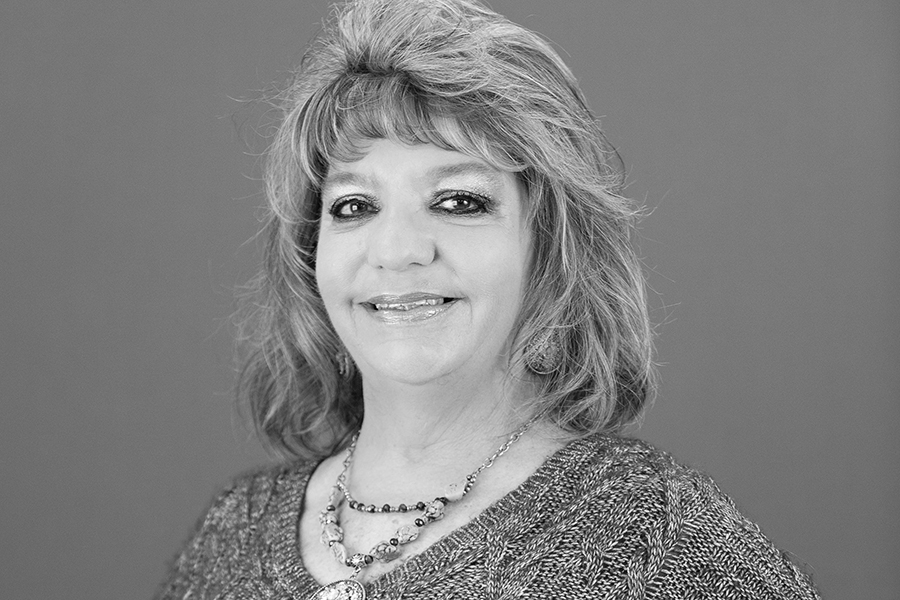 Ask the Expert: My Top 3 recommendations for seeing Alaska

Planning a trip to Alaska can be overwhelming. Here are a few suggestions to make seeing this spectacular region easier.

Seeing this part of South Carolina and Georgia from the seat of a bicycle matches the relaxed pace for which the South is known.

Our “Three Days In” feature heads to the mountains for some small-town skiing paired with nearby hot springs locales to soak those aching muscles. Whether you choose to spend 24 hours in each, or...