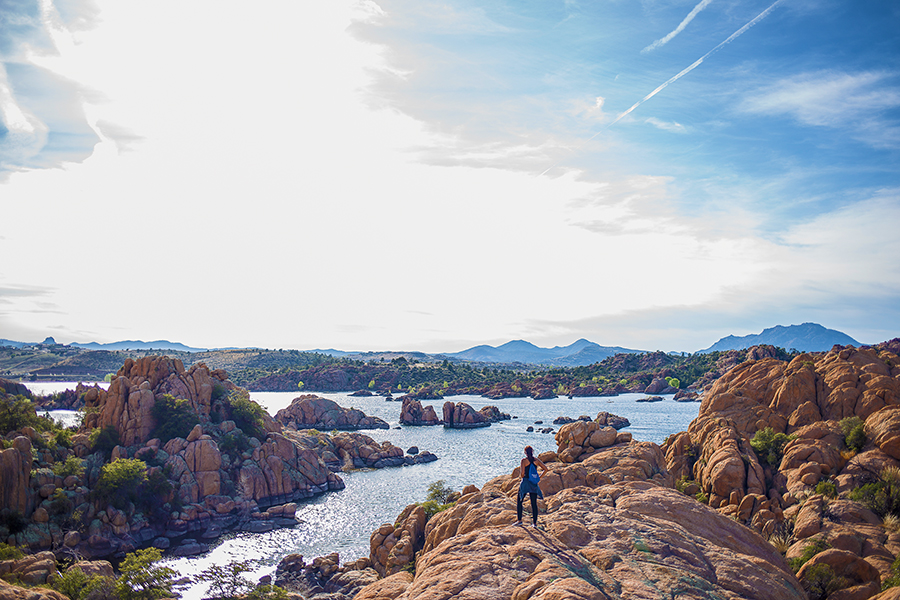 From Wild West historic towns to ancient dwellings and stunning red rock scenery, a solo road trip in Northern Arizona was just what I needed to re-charge, while safely social distancing.

Not wanting to be enticed by multiple sites on a road trip to Arizona, I snagged a cheap non-stop flight to Phoenix, rented a car, and drove about two hours to Prescott. If you want to fly and drive, United now offers daily non-stop flights from Denver to Phoenix, Prescott, and Flagstaff. 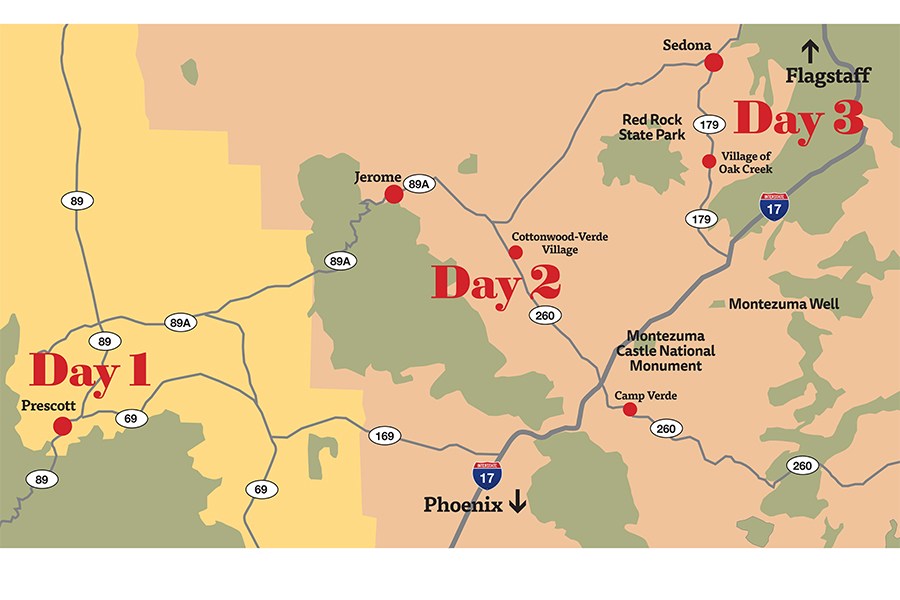 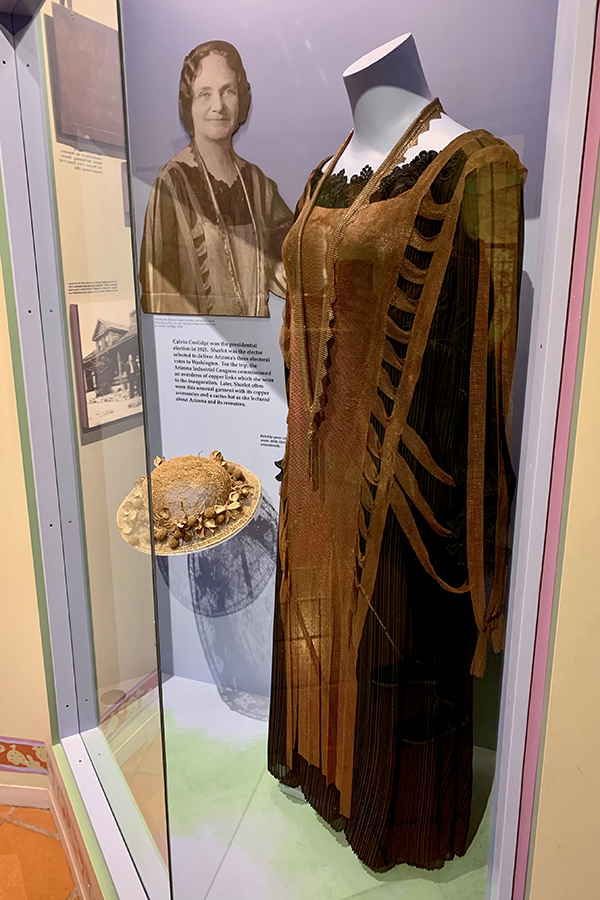 It was a cold, windy, and a bit wintry afternoon when I arrived in Prescott. When I checked in to the AAA Three Diamond-designated Hassayampa Inn, which has hosted celebrities from Will Rogers to Tom Selleck, I learned the correct pronunciation of the town’s name is “press-skit,” like biscuit.

As I walked through the lobby, I was enraptured with the intricate painted ceiling, inviting fireplace, and antique furniture of this 1927 historic boutique hotel. An employee offered to take me up the hotel’s original elevator instead of using the stairs to my deluxe king room, which had plenty of modern amenities, yet the décor still gave it historic charm.

Prescott twice served as the territorial capital of Arizona, and wanting to experience more of the town’s history, I went on a self-guided tour of the Prescott Heritage Trail. I strolled along the historic Whiskey Row to see some of the old watering holes like Palace Saloon, the oldest frontier saloon in Arizona, where patrons such as Wyatt Earp and Doc Holliday once frequented.

The old firehouse and jail now houses the Prescott Chamber Visitor Information Center, where you can pick up a History Hunt Adventure Guide—a fun, interactive way for all ages to explore the Prescott Heritage Trail. I had fun answering some of the questions walking around the Yavapai County Courthouse and Plaza.

Thanks to the inclement weather, I had the AAA GEM (Great Experience for Members) attraction Sharlot Hall Museum pretty much to myself. There are six historic buildings including the Governor’s Mansion built in 1864. I started in the Lawler Exhibit Center to learn about Sharlot Hall, who was a poet, historian and activist. Her copper overdress and prickly pear cactus hat she wore for President Calvin Coolidge’s second inauguration in 1925 was my favorite. It felt as though I had traveled back in time as I wandered through the museum’s houses and cabins, including Arizona’s oldest surviving building, Fort Misery.

My tummy started grumbling and I retreated to a cozy nook in the Peacock Room’s bar in the Hassayampa Inn. A Prescott sidecar cocktail was the perfect complement to my dinner of a baked brie puffed pastry and grilled pear salad before retiring for the night. 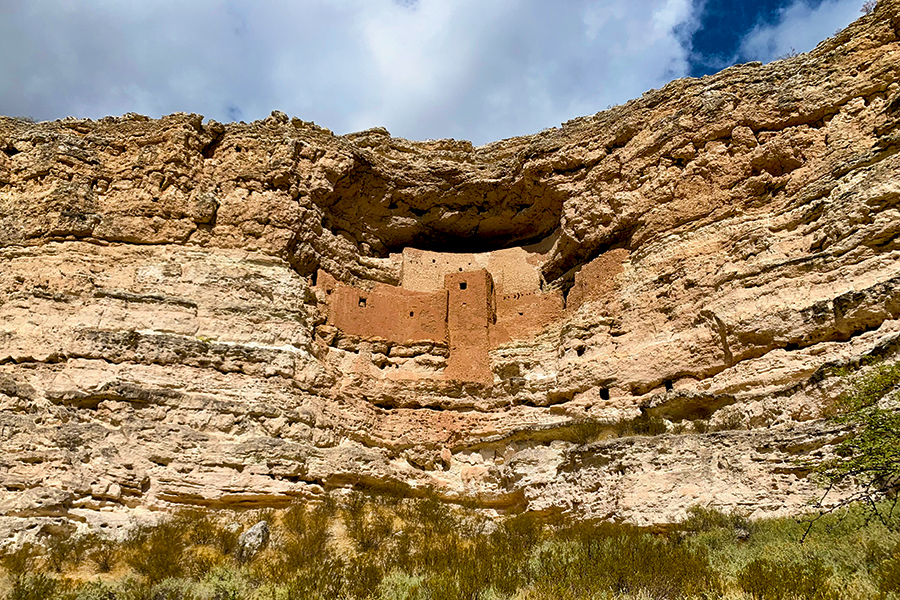 The next morning, I bundled up for a walk in Prescott’s “Nob Hill” district, where I admired the Victorian-style homes, and colorful “Art for All” mural in an alleyway on S. Granite Street, before driving up to the Watson Lake Recreational Area. For a $3 day pass, you can explore the lumpy, rippled granite dells encasing the lake. On my short walk, I dreamt of kayaking in this out-of-this-world landscape.

Wanting to see more of this area, I hopped back in my rental car and headed toward Sedona. The scenic route is up State Route 89A, but due to the icy driving conditions on this trip, I chose an alternate course. It’s a beautiful drive into the Verde Valley, where the Sinagua people lived more than 1,000 years ago, and home to the Montezuma Castle National Monument. You can easily see several of the Sinagua people’s ancient dwelling sites, which date back to AD 1100-1425, in a half-day.

Nestled in the limestone cliff overlooking Beaver Creek, the 20-room Montezuma Castle could have housed about 35 people, and it’s believed 150-200 people lived in the community in the additional pueblos and rock shelters, like Castle A—a 45-room, 5-story apartment-like building.

Another site worth visiting is a lush lake called Montezuma Well. About a 15-minute drive from Montezuma Castle, there are dwellings near the rim and others nearby. If you hike 150 yards down stone stairs you can see the Swallet Cave Ruin and get a water’s edge view. The basin formed when an immense underground cavern collapsed, and an underground volcanic basalt dike forced water up to the surface. The water stays a constant 74 degrees, and because of its high levels of dissolved carbon dioxide (80 times higher than most lakes), there are no fish.

My next stop was a town that’s had many nicknames. The copper, gold, and silver mining town of Jerome was built in the late 1800s at a 30-degree incline on Cleopatra Hill and has been called “America’s Most Vertical City.” In 1903, the boom town was dubbed the “Wickedest City in the West.” After the mines closed in the 1950s, fewer than 100 hardy souls called Jerome home, where it gained the title of “Largest Ghost Town in America,” and in 1967, it was designated as a Historic District. 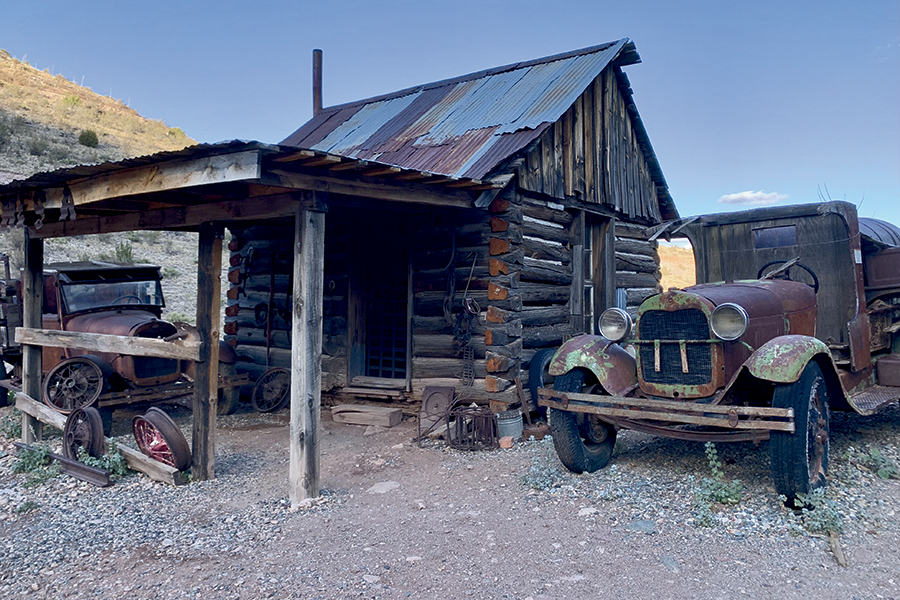 The Gold King Mine, which originally struck gold in 1890 but closed down in 1914, is now a fun ghost town filled with old-timey buildings, vintage trucks, mining equipment, and a handful of barnyard animals.© Jennifer Broome

To learn more about Jerome’s mining history, and see lots of mining artifacts, stop in the Mine Museum. As I walked along what was once the red-light district in the mining days, I found quite an unusual shop, Nellie Bly Kaleidoscopes—the world’s largest kaleidoscopes dealer. Unfortunately, the shop was so busy I only made it to the front door; however, I did get to experience its magic by looking at flowers through a kaleidoscope outside. The oddest attraction I saw was the site of the original 1896 saloon. People were tossing coins trying to hit two toilets and an outhouse in the remnants of the historic building. Daylight was fading and I still needed to get to Sedona.

As I got closer, I could see the red rock formations glowing in the soft hues of sunset. Taking advantage of my AAA discount, I checked into the Three Diamond-designated Element Sedona in the Village of Oak Creek, which is about 20 minutes south of Uptown Sedona and West Sedona, but very close to some iconic rock features. The hotel opened in February 2020, and features 117 guestrooms, as well as three Studio Commons—a communal space shared with four rooms. This Element property is only one of three in the world to offer this type of ultra-suite room.

I didn’t consider Sedona a gastronomy destination until I ate the culinary creations at Dahl & DiLuca Ristorante Italiano, a AAA Three Diamond-designated restaurant. Sitting in a private nook just off the bar, I was whisked away to Tuscany as I savored the subtle spicy kick of the arancini’s gooey yumminess. Mushrooms added a twist to a traditional caprese salad, and the mushroom marinade was like a secret elixir. I’d never had a calamari steak, but the calamari capesante topped with two diver scallops is a delicately divine dish. As I spooned bites of the lemon lavender panna cotta dessert, which was almost too pretty to eat, I chatted with chef and restaurateur Lisa Dahl. She has turned her passion for cooking and food into a culinary empire, putting Sedona on the foodie road map. Her mantra is “when you cook with love, you feed the soul.” Before finishing dessert, I was already plotting which of her other restaurants I was going try next. 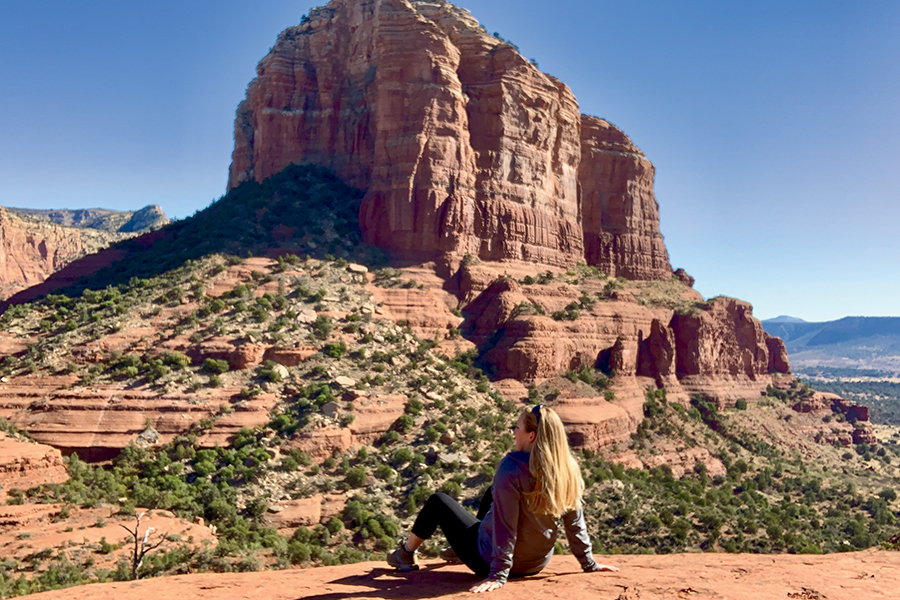 The author takes a moment to enjoy the view from Bell Rock. © Jennifer Broome

The next morning, I hit the trail to Bell Rock—one of the strongest vortexes in Sedona. The transformational energy of the vortexes is why Sedona is considered one of the most spiritual places on earth.

I hiked the fairly flat trail with the intention of connecting multiple trails, including around Courthouse Rock. On the back side of Bell Rock, a local woman suggested I take Rector Trail. I was like a magnet drawn to metal as I scrambled up. I found a spot to sit, soak in the view and wait for tingling on the back of my neck to start—a moment when some say they feel Sedona’s vortexes. The lightning bolt zing I was expecting was more like the gentle roll of an ocean wave. I felt a calmness similar to coming out of savasana at the end of a yoga class. I surrendered to the moment and sat in stillness for so long I had to cut my hike short. Perhaps it was the earth’s way of suggesting I needed to slow down and reconnect.

Hungry after my hike, I ordered takeaway from Butterfly Burger, a “couture burger lounge” that was next to my hotel. It’s the newest of the five in the Dahl Restaurant Group that I had wanted to try. I devoured “The Hipster,” a lentil-walnut sofrito burger, and Asian kale slaw, while sitting in the respite of Element Sedona’s expansive patio and pool area.

I spent the afternoon in a mini retreat with Sedona Soul Adventures, hoping to experience more of the mysterious energy field emanating from the red rocks. Like many during COVID-19, I’ve felt isolated and stuck. In just a couple of hours with Victoria, one of their master practitioners, I discovered I needed some help in letting go of some grief, too.

Victoria took me to Crescent Moon Ranch for a transformational hike on Secret Slickrock Trail. Surrounded by twisties, the trees twisted from the swirling winds commonly found at vortex sites, we laid down on a sandstone cliff with a front row seat to Cathedral Rock, one of Sedona’s most iconic formations and vortexes. That simple lesson taught me you have to ground in order to grow.

Now it was time to really kick back and relax…with a margarita. I had dinner at the AAA-approved Oaxaca, a family-friendly restaurant serving up dishes inspired by the Mexican region it’s named after. Sipping an Oaxacarita, I happily went into a food coma dining on veggie enchiladas in blue corn tortillas. 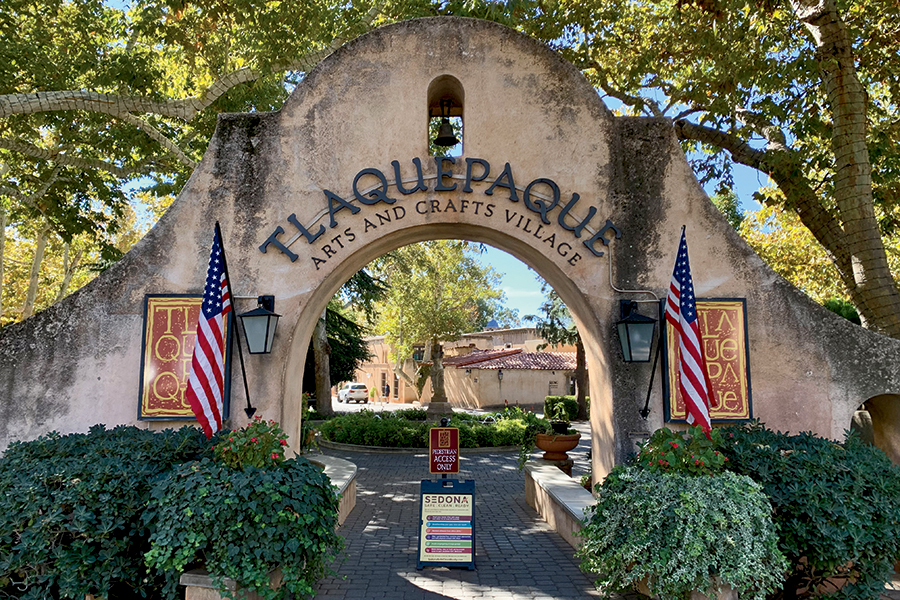 While eating, I was scheming how I was going to spend another half day in Sedona, because one full day is not enough. There are so many options. Ditch the crowds at Cathedral Rock and hike the uber-scenic Little Horse Trail to see the Two Nuns formation. Marvel at Chapel of the Holy Cross. Drive a mile up Schnebly Hill Road to see Snoopy Rock and hike Munds Wagon Trail. Do a little shopping in Tlaquepaque Village and then drive up to the Sedona Airport Scenic Overlook to enjoy the view of Coffee Pot Rock and other formations. Then do the short hike to the Airport Vortex to experience more of the earth’s mystical vibrations that make Sedona so special.

If you’re going to hike, bike or trail-ride along the Red Rock Scenic Byway, you’ll need a Red Rock Pass ($5 daily, $15 weekly). There are kiosks at most trailheads, and if you have an annual national park pass, you’re covered.

Watch your inbox for more things to do in Northern Arizona in the next EnCompass Exclusive e-newsletter—a monthly email that provides exclusive content you won’t find in the print edition. Plus, keep an eye out for the next series of “Three Days In” in the Spring 2021 (March/April/May) edition of EnCompass.

Jennifer Broome is a frequent contributor to EnCompass, and a freelance television personality, speaker, travel journalist and blogger. She has traveled to all 50 states and more than 30 countries. She’s an avid hiker, skier and adventurer. Follow her on Instagram @jenniferbroometv. 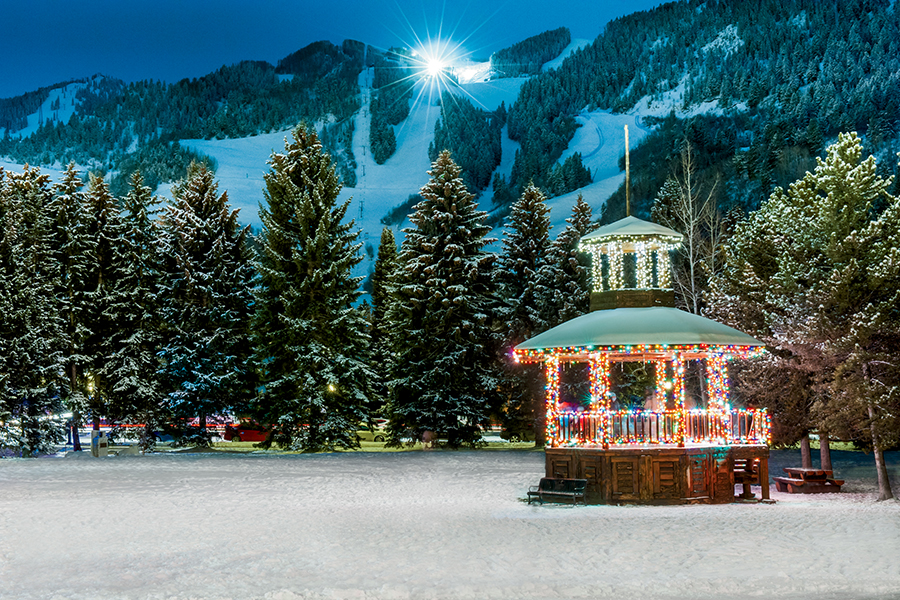 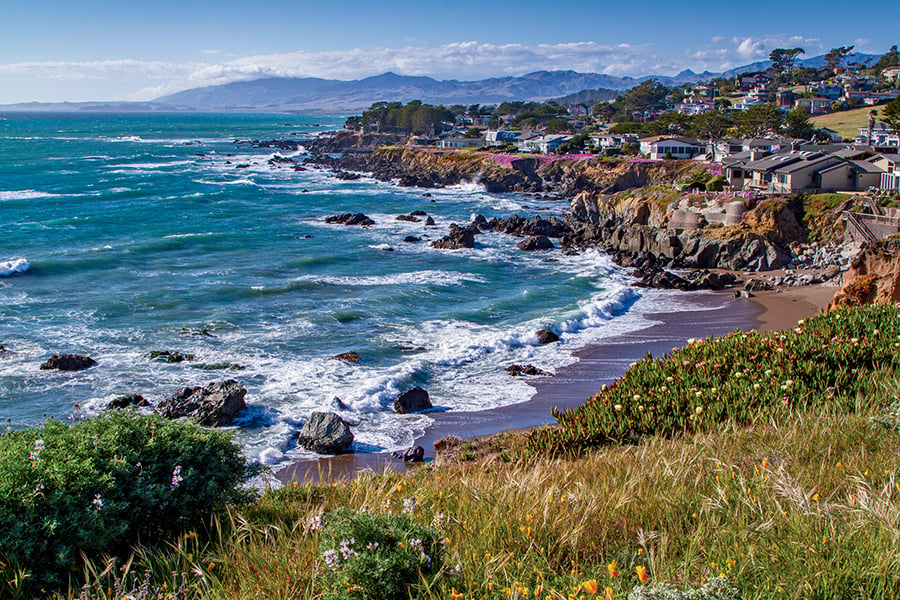